At the beginning of Iyengar Yoga classes, we chant an invocation to sage Patanjali – the father of yoga.

Visit our schedule page to find out when we teach Iyengar Yoga at LiveYoga Amsterdam.
Every other week we have workshops based on the Iyengar Style of Yoga. Visit our Event page. 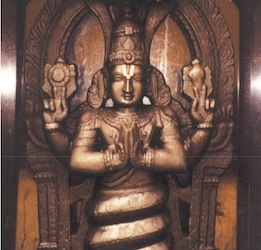 According to Indian mythology, Patanjali was the incarnation of lord Adisesa. Legend says he fell into the praying hands of Ganukia who had no children. One day she was praying to the Sun God while a little snake in the water in the palms of her hands turned into a human shape. She raised him as her child and named him Patanjali; pata = fall, anjali = the folding of the hands during prayer.

Patanjali is the author of three important commentaries; the Mahabhasya, on grammar for right speech, Ayurveda, medicine for health, and The Yoga Sutras – showing how through Yoga practice we can gain control on our mind and emotions, overcome obstacles and attain union with the divine. 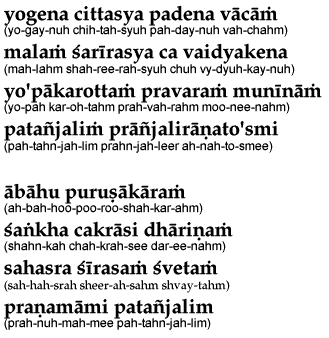 Salutation to the noblest sage – Patanjali, who gave us yoga for serenity of mind, grammar for purity of speech, and medicine for the health of the body.

I prostrate before Patanjali, whose upper body has a human form, whose arms hold a conch and disk, and whose crowned by a thousand headed cobra,

O incarnation of Adisesa, my salutations to Thee.

ABOUT THE SYMBOLS IN THE INVOCATION:

The Cobra has many symbols, every religion had some sort of serpent worship. In the ‘Hathayoga Paradipika’ the Lord of Serpents, Ananta (=infinite, eternal), supports the earth and protects it. It is believed that snakes shed their skins and emerge as new, therefore they are a symbol of eternity, fertility, regeneration, evolution and wisdom. It’s venom is poisonous but medicinal, it represents the practice of Yoga in which we learn how to convert emotions like anger, greed and lust to control, contentment, love and compassion.

The Human Torso symbolises the essence of Yoga, our evolution through the yoga practice. As Patanjali transformed from a small snake into a human body, so does anyone can grow, expand their intelligence and transform. 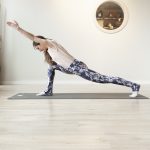 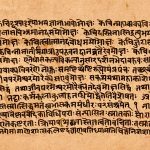 Sanskrit Dictionary – the language of yoga